Welcome to ‘All our yesterdays …’ in honour of our 70th / 120th Anniversary this year (70 years of the Phoenix & 50 years of the Glasgow Orpheus Choir from whom we are directly descended.) Our Choir President, Angus Leitch, will make this his blog of the choir’s  life and history from our rising from the ashes of the Orpheus Choir in 1951 down to the present day and our 70th Anniversary.

The start of it all …

Picture this – the final public appearance of our predecessor, the Glasgow Orpheus Choir at the Festival of Britain in London on 16th June 1951. The final notes of the final song died away and the end had come after a hectic Jubilee Season (but that’s a story for another day).

Over that summer some 67 members of the Orpheus met informally and, in early September, decided to form a new choir under the conductorship of one of their number, Robert Howie, who was Sir Hugh Roberton’s deputy in the Orpheus Choir.

The Daily Express reported: “From a Church Hall in Albion Street, Glasgow, last night came the strains of  ‘Belmont’. It was a requiem to the passing of the Orpheus Choir and the birthday song of a new choir.”

‘Belmont’ – recorded by the Glasgow Orpheus Choir in the 1940s: 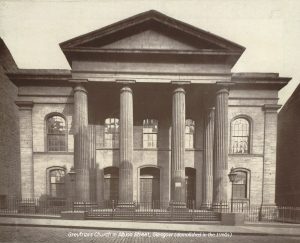 Several different names were considered, the only stipulation being that the name should not contain the word “Orpheus”. We were almost called The Glasgow Greyfriars Choir. Albion, St Mungo and Aeolian were also mooted but, after much deliberation, at the first Annual Meeting on the 17th September 1951, the name “phoenix” emerged as the most popular selection and was unanimously approved. In the circumstances, what name could have been more appropriate? The Daily Mail reported next day “From the ashes of Glasgow’s fabulous Orpheus Choir there arose last night a squalling choral infant whose name will also become legend in the world of music – The Glasgow Phoenix Choir.” 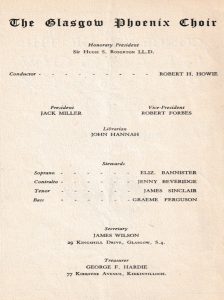 Having enthusiastically approved the name “The Glasgow Phoenix Choir”, the meeting went on to appoint the prime movers in the formation of the choir to positions in the first Council. The meeting ended with the singing of “On Jordan’s Banks”, the piece on which the final Orpheus rehearsal had ended earlier in the year.

Rehearsals commenced in Greyfriars Church Hall (where the Orpheus had rehearsed) on Monday 1st October 1951 at 7.30 pm with Robert Howie as Conductor and David Anderson as Accompanist. The repertoire of the new choir was to be “in the Orpheus style” and Sir Hugh gave the new venture his blessing. 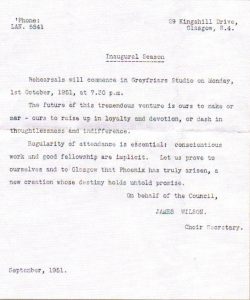 One of the last minutes of the Glasgow Orpheus Choir, dated 31st October 1951, records that it was agreed to grant use of the church hall to the Phoenix for rehearsals at a let of 10/6d (52.5 pence) per night and to sell the entire music library of the Orpheus, comprising 584 pieces, to the Phoenix at half the original cost.  Assuming an average cost of 6d (2.5p) per piece, the whole library was purchased for about £15.00. This was funded by a levy of 5/- (25p) on each member.

Rehearsals worked towards a series of concerts starting in March. The first public appearance of the Glasgow Phoenix Choir was on February 27th 1952 in Kilmarnock. This was followed by concerts in Alexandria Old Parish Church and Motherwell Town Hall in early March before the big event – the first Glasgow Concert in St Andrew’s Hall on 19th March 1952.  Subsequently the programme was performed in Paisley,  Clydebank, Ayr, Oban, Largs and Pitlochry Festival Theatre where ticket prices ranged from 3/6d (17.5p) to 7/6d (37.5p) and you could reserve your table at the interval for an “exclusive matinee tea”. Could this be considered as the first choir tour? 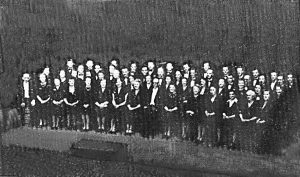 < Earliest known photograph of the newly formed Phoenix Choir, taken in 1952. (Digitally recovered and edited from a 1952 Concert Programme cover)

Programme for the first Glasgow concert:

One of the items sung in that first Glasgow concert was the beautiful “O Lovely Heart” (words by J.M.Plunkett and set to music by Sir Hugh Roberton). Sung here by the choir in 1962 on our third album “Abide With Me” and conducted by Peter Mooney.

At the outset, there was not a penny in the Phoenix kitty. Not a jot. Not a single sheet of music. The Orpheus music library was sold, at half price, to the Phoenix Choir financed by a levy of 5/- on each member. The choir had to refuse requests to sing in England and Ireland because of the fear of losing money. The Orpheus Trust, set up to foster choral music, would not permit the new choir to wear the purple robes of the old and when the choir sang in Pitlochry Festival Theatre in the summer of 1952 the women wore summer dresses and the men sports jackets and flannels. It wasn’t until the spring concert in March 1953 that the Phoenix appeared in their new robes – purple for the men, lilac for the women – which served the choir well for the next 40 years. The press report of the choir’s appearance in Croydon’s Fairfield Hall in 1966 comments that they were “tastefully gowned in mauve, light for the ladies, darker for the gentlemen”

Here they are, pictured in 1953 at a charity concert in Glasgow’s St. Andrew’s Halls.

Finances quickly improved thanks to the generous support of the Glasgow audiences and the choir were able to afford to engage Heddle Nash as the guest artist at the spring concert in 1954. Over the next two seasons, they began to travel south of the border to Newcastle, Manchester, Liverpool, London and other venues as indicated by the diary dates for the Fourth Season                    Quite an impressive start!

The parting of the ways … 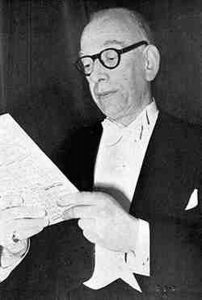 Robert Howie didn’t have it easy in his years as conductor. Having been a tenor and Deputy Conductor in the Orpheus, it was probably inevitable that he would follow in the style and concert performance of that choir. However, the Phoenix was not the Orpheus and Robert Howie was not Hugh Roberton. Internal rumblings led to a crisis of confidence in his leadership. The official announcement from the choir stated that Mr Howie resigned after the 1955 AGM  for “health and personal reasons”. Mr Howie denied that, claiming that his resignation had nothing to do with his health nor had he any personal reason for resigning. In his own words: “the conduct of several women members of the choir who had been with the Orpheus contributed to certain incidents. These influenced me to resign. Though these members – they resisted the necessary discipline – left later, I was not asked to resume as conductor.”  It was reported in the press at the time that several of the choir’s key singers, all former Orpheus members, walked out at the end of Season 1954/55 and the Choir President, Jack Miller, later admitted “the singers left before Mr Howie. If a conductor sees a number of singers of quality leaving, then he may wish to follow.” Nothing more was said, and the Phoenix began Season 1955/56, its 5th Season, without a permanent conductor. Adverts had been placed, auditions had been held but no appointment had been made. George Hardie was appointed from the ranks as temporary conductor and began rehearsing the choir for an intensive season which included concerts in Manchester, Liverpool, Birmingham and Edinburgh in November and Glasgow in December. 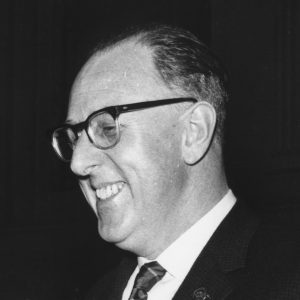 The storm in a teacup around the 1955 AGM  was eventually resolved by the appointment of Mr Peter Mooney as conductor. The choice was between Mr Mooney and one other applicant. Peter Mooney, Principal Teacher of Music at Hamilton Academy since 1952, came with a wide experience of choral conducting although the Phoenix was to be his first experience of conducting a mixed adult choir. He took up his duties on December 12th 1955 after the series of Glasgow Concerts and benefited from the advantage of having had no previous contact with either the Phoenix or the Orpheus. He remained conductor for the next 28 years until his death in 1983.