From singing with Michael Crawford to celebrating our 50th/100th Anniversary, touring the Highlands and another European tour or two, the pace did not slacken. 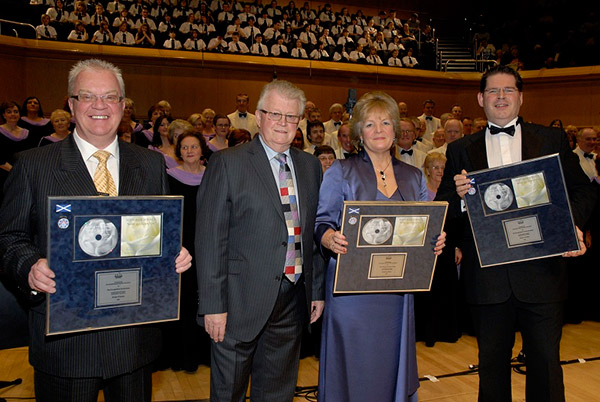 Following release of the Choir’s 34th album, Songs of Solace, in October 2009 in conjunction with our sponsors “Co-operative Funeralcare” and the Co-operative Funeralcare Brass Band, the disc achieved Silver status by Christmas of the same year! This is the third of the choir’s recordings to have reached “Silver”, the others being Iona Abbey and Highland Cathedral. Marilyn Smith, our conductor, received the award on the choir’s behalf at the Glasgow Royal Concert Hall during our sellout Christmas concert, with Michael Fowles receiving the award on behalf of the Band. The Scottish Record Industry Association Silver Disc award was presented by Jack Scott, Managing Director of Scotdisc, our recording company, in the presence of David Hendry, Managing Director of Co-operative Funeralcare. 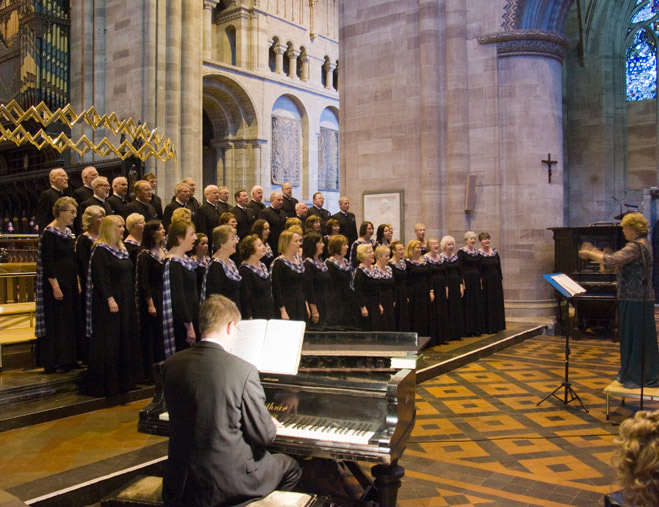 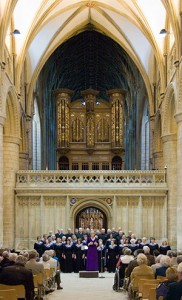 In May 2008 we returned to the west of England at the invitation of our friends the Hereford Police Male Choir. Both choirs performed again in Hereford Cathedral, and for the first time together in the magnificent Gloucester Cathedral, rounding off the weekend with an afternoon concert in the church of the Holy Trinity, Hereford. The weather was damp for most of the time, but it never dampened our spirits ! 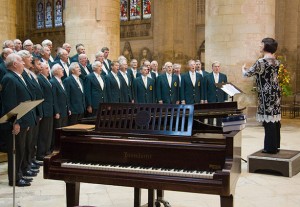 In season 2007/2008 we were approached by The Co-operative Funeralcare with a view to supporting the choir in its activities. Needless to say, we were very happy to accept their generous offer, and are delighted that the Co-Op have decided to continue their support for the future. The Managing Director of Co-operative Funeralcare at the time said, “The sponsorship of this popular choir is literally music to our ears. Music of all types is synonymous with funerals and can help to reflect a person’s life. We are pleased to be able to link up with the top quality Glasgow Phoenix Choir to help them to continue the excellent work for which they are well known.We have strong links with many local communities and this sponsorship is one way in which we can give something back to the community of Glasgow and also provides us with an opportunity to help raise funds for very worthwhile charities. The Glasgow Phoenix Choir is also proud to be associated with Co-operative Funeralcare and they look forward to working closely with our team to build on the choir’s success.”

2007 – Tour of the North Of Scotland and Orkney 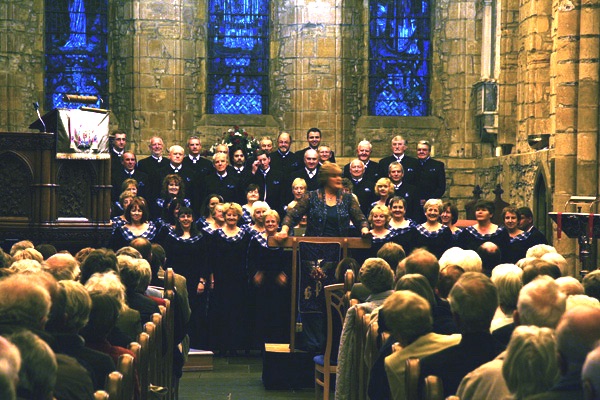 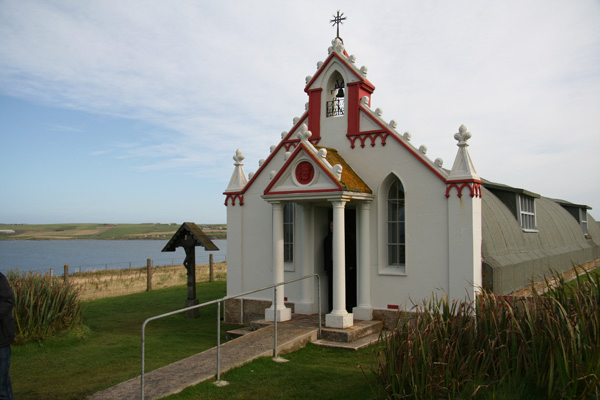 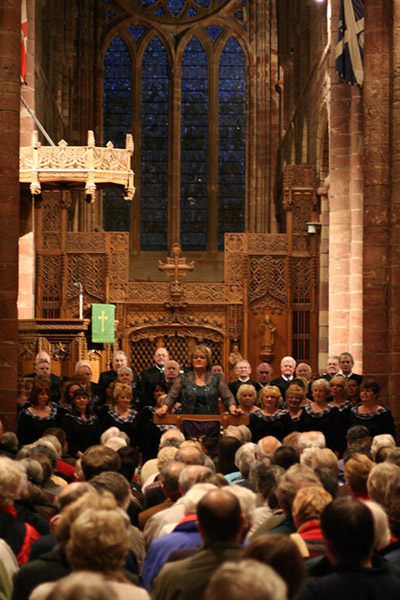 In September 2007 the choir returned to the North of Scotland and Orkney for concerts in Dornoch Cathedral, St. Magnus Cathedral, Kirkwall and the West Kirk, Thurso. We also completed recordings for the BBC in St Magnus’ Cathedral Kirkwall and the Italian Chapel on Orkney. 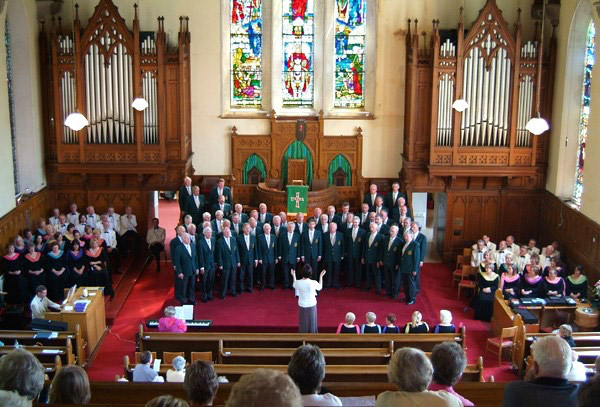 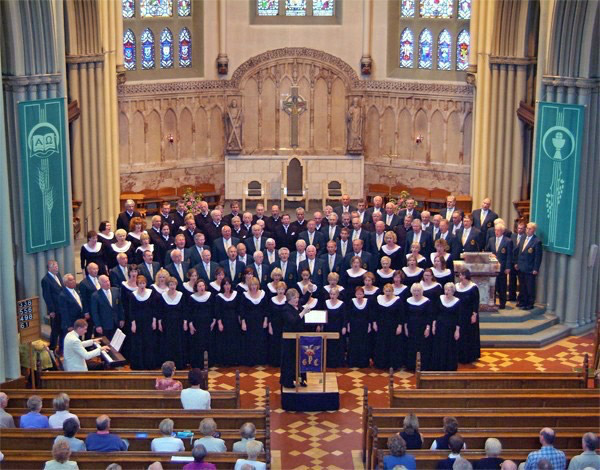 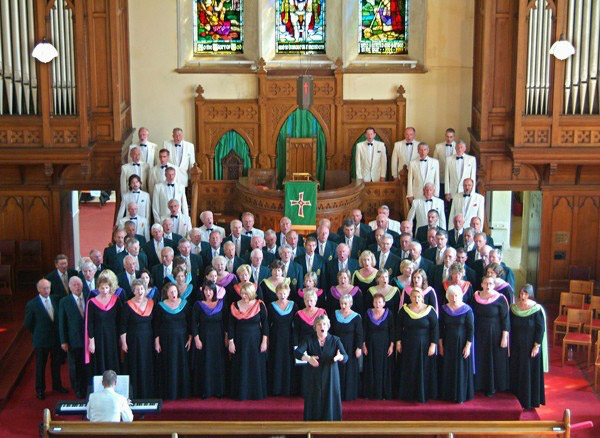 A welcome return visit in May by the Hereford Police Male Voice Choir who , in their own words, are composed of “policemen, ex policemen, and others known to the police !” Our association with the Hereford Police Male Choir began in 2000 at the suggestion of our then Honorary President, Peter Morrison. Since the initial contact was made the choirs have exchanged several visits. After a very well received performance to a full house at Moncrieff Church in East Kilbride, both choirs took a trip “doon the watter” to the Isle of Bute the following day, in glorious sunshine, for a concert at Trinity Church, Rothesay. The short tour was rounded off with an excellent joint performance in St Andrew’s Cathedral, Glasgow on the Sunday. 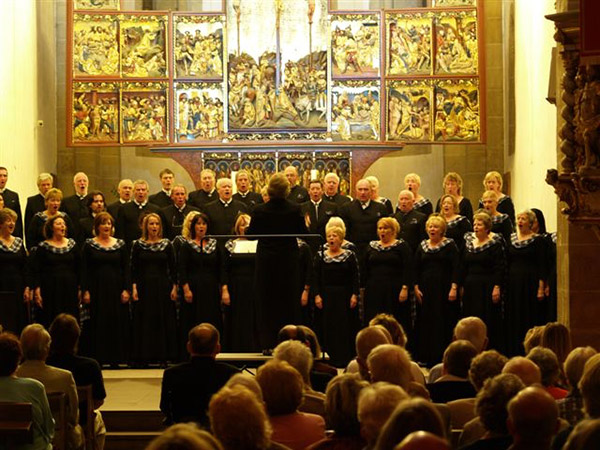 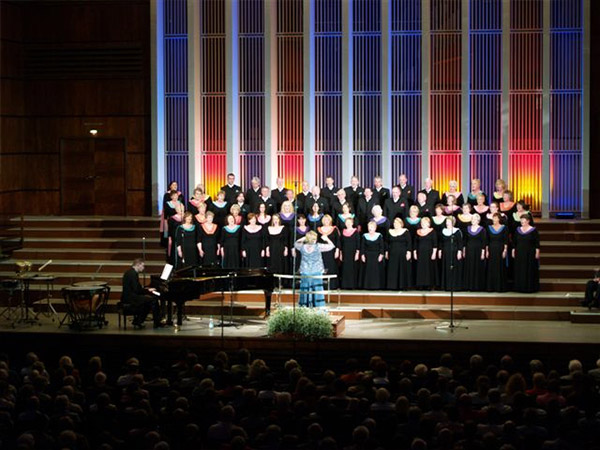 In May of 2007 the choir made a much anticipated return visit to our friends, the Widukind Chor, Enger. Despite a 5am check in at the airport, the choir was still standing to give a midnight performance in the Stiftskirche, Enger. Maybe the tiredness focused our minds, since the end result was a standing ovation from the audience! On the following evening we joined with the Widukind Chor and the Golden Glories at an international gala concert held in the 1600 seat “Rudolph Oetker Halle” in Bielefeld. Another very successful concert. The tour was completed with a wonderful afternoon performance in Melle Neuenkirchen ,with the Männerchor St Annen ,which resulted in another standing ovation and no less than four encores! If our conductor, Marilyn J. Smith, hadn’t left the platform we might still be there! 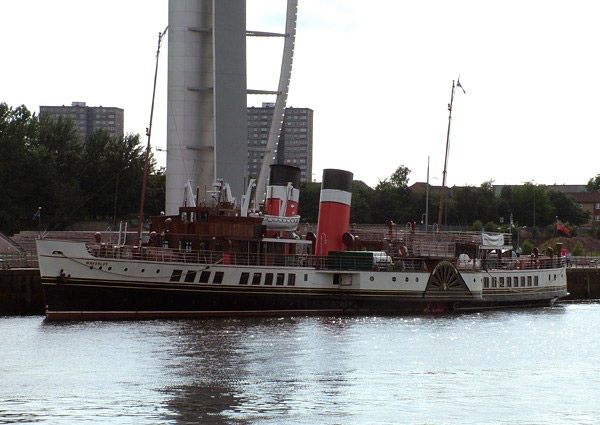 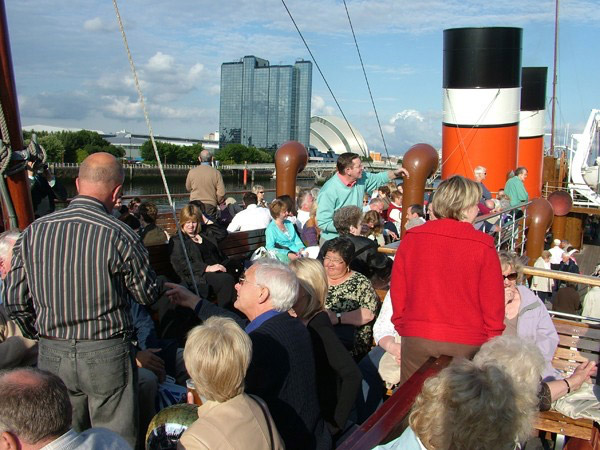 A concert of a very different kind!

In June 2005 we hired the world’s last sea-going paddle steam ship, the Waverley, for a trip down the river and back. In all the trip takes around 3 hours. Not a concert in the conventional sense of the word, but a chance to hear the choir, its soloists, and some friends in an informal, sometimes humorously irreverent fun filled evening. 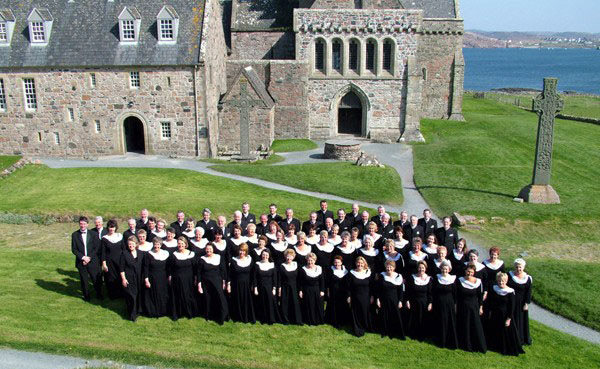 Tour of the Inner Hebrides – Mull and Iona

With concerts in St.John’s Episcopal Cathedral in Oban, Salen Church on the Isle of Mull and in the beautiful Iona Abbey this was a busy but hugely enjoyable and rewarding tour for the choir. The choir was on top form and even the weather was kind to us! 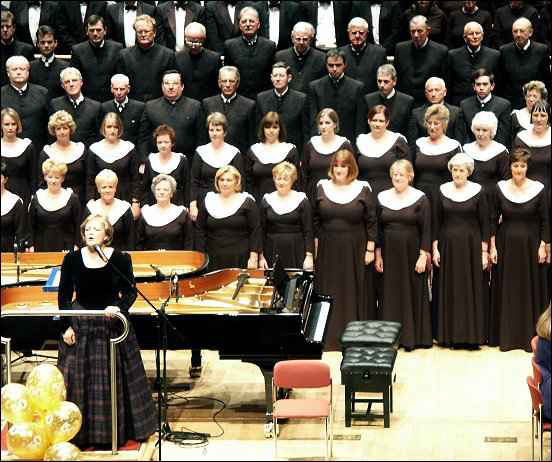 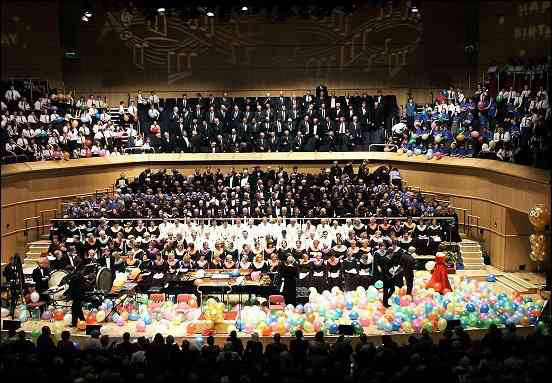 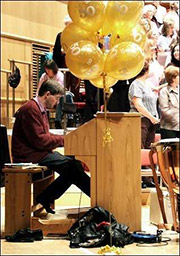 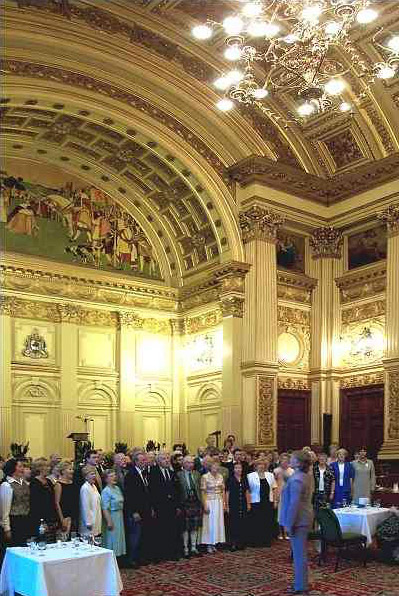 The choir celebrates its 50th Birthday, and the 100th anniversary

of it’s historic legacy with a Civic Reception at Glasgow City Chambers. 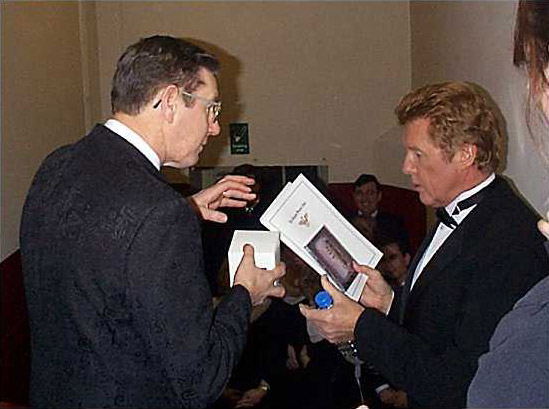 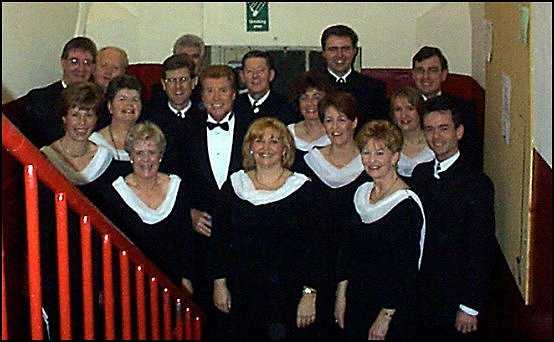 In April 2000, a section of the Choir had the honour of providing backing choral music for the start of Michael Crawford’s UK tour. The venues were the 3,000 seater Clyde Auditorium in Glasgow (the “Armadillo”) and the Playhouse Theatre in Edinburgh. Michael gave a stunning performance of songs from musicals which made him famous and some from others which he maintained he would have liked to have been in. In all the group accompanied him in seven items and received glowing acknowledgements from the star himself and the Musical Director, Larry Blanc.

The April 2000 radio broadcast as part of “The Reel Blend”, recorded by Jennifer Cruikshank, contained some very interesting interviews with members of the Choir. Betty Sinclair and Mary McKay talked about memories of the Orpheus Choir and Sir Hugh Roberton:

Marilyn J Smith spoke of her role as conductor:

Ian MacDonald talked of his family association with the Choir – his grandfather was a member of the Toynbee Musical Association – and John Blue spoke a little of the future:

Donald Burgess, J. Lawson Purdie, Janette B. Walker, and Jan Bonomy gave their impressions of life in the Phoenix Choir: