Glasgow Phoenix Choir can trace its history back to the great Orpheus! The Glasgow Orpheus Choir gave private performances by Royal Command at Balmoral and entertained Prime Ministers and Ambassadors at Downing Street and Chequers – quite a reputation, but the Glasgow Phoenix Choir does not claim or even aspire to be the Orpheus. Times have changed, musical tastes have changed, and audiences (and singers!) of the internet age demand and expect a very different concert experience from those of the first half of the 20th century. That said, we are immensely proud of our roots, and without the foundation of the great Orpheus the Phoenix would not exist to outlive its predecessor. Here is a taste of what that foundation was…. 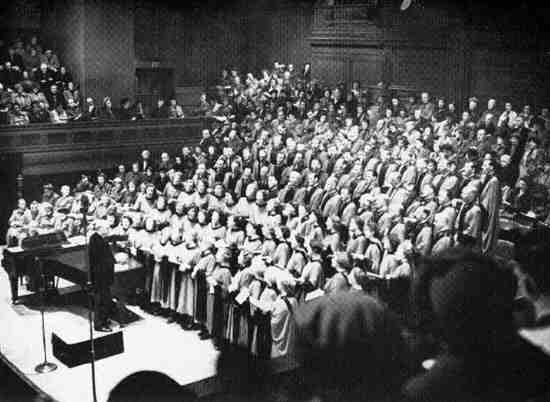 Well it looks like any choir, doesn’t it? But it wasn’t. For fifty years, three generations, the Glasgow Orpheus Choir, under its conductor Sir Hugh Roberton, brought real music to millions of people throughout the world.
If one were to write dispassionately about the achievements of the Orpheus, one would scarcely be believed, and to write passionately is best left to the conductor himself. Thus we have selected a few extracts from:
Orpheus With His Lute, A Glasgow Orpheus Choir Anthology. Selected and edited by Hugh S. Roberton and Kenneth Roberton, Pergamon Press, 1963.

The Orpheus sing “All in the April Evening”

Genesis. 1901. The present Orpheus conductor takes up conductorship of Toynbee House Choir (25 Rottenrow, Glasgow). Purpose of choir, recreation. No test. Come one, come all. Rough and ready singing. Enthusiasm.
A little man dreaming dreams, Tom McDougall (Secretary). “This choir’s going to be a big thing.”
Another, J. B. Retson (President). “This choir’s going to make history.” Both men have “folded their tents—. Their faith has been as a beacon.
Solid groundwork, digging, sowing. Not much to show in the first year or two, but something, something full of promise. 1903, reaping starts. Concert in East End Exhibition (December). Terrific enthusiasm. The public discovers a Choir; the Choir discovers a public. Happy union still holding fast after more than 40 years.
Domestic trouble. Choir growing in importance, still a side-line of Toynbee Men’s Social Club. Position unhappy and untenable. Self-government sought. Not granted. Exodus. And thus and then the Orpheus.
That was in the middle of season 1905-1906, 40 years ago. Breathing freely, the pace quickens. First annual Orpheus Concert, a packed City Hall. Next, St. Andrew’s Hall. Provincial concerts develop. Then London (1908). A Sunday League Concert in Queen’s Hall. Negotiated in person by Dreamer McDougall in dictatorial interview with Sunday League secretary.
SECRETARY: ” But we don’t want choirs; they’re of no interest to the public.”
McDOUGALL: “But you haven’t heard the Orpheus!”
SECRETARY: “No!”
McDOUGALL: “Then you don’t know what you’re talking about. Believe me, it is quite different, and it does interest the public.”
McDougall wins. A success. London press notices give Glasgow a shake-up. Leeds next, then Batley, and Liverpool, and Birmingham, and Sheffield, and Chesterfield, and York, and Manchester, and Burnley, and Portsmouth, and Wolverhampton, and Newcastle, and Hull, and Carlisle, and Belfast, and Dublin, not to speak of every Scottish centre.
1926. Tour of Canada and U.S.A. 22 concerts in 20 centres in 26 days, with 3832 miles land-travelling….

Unique experience. Command performance at Balmoral Castle (King George V and Queen Mary), the present Queen (Elizabeth, Queen Consort) calling up request pieces to platform….
More experiences – Singing at 10 Downing Street before the present King and Queen (George VI & Elizabeth); also at 11 Downing Street, audience consisting of statesmen, including two Prime Ministers; and at Chequers, the choir giving a real ceilidh in the hall, the Prime Minister sitting on the fender.
Singing with bowed heads by graveside at burial of Ramsay MacDonald at Spynie, Lossiemouth.

Singing to soldiers of two great wars, in hospitals, and camps, and canteens; and always singing up to them, never down. Moving speeches by commanding officers; one, a surgeon, stating that never till then had he realised the healing power of music.

Broadcasting too. From earliest days. Listeners everywhere, from Butt of Lewis to Land’s End, and far beyond. Very far beyond. On the Irrawaddy river in Burma, a son of the conductor, with a cargo of elephants in tow, hears Choir (and his father’s voice speaking) from the Queen’s Hall, London. From the frozen north a befurred trapper journeys south to Montreal to meet conductor simply to offer his thanks, and the thanks of his mates, for Orpheus broadcasts. And a Prime Minister, Peter Fraser, of New Zealand, speaking in Glasgow, pays tribute, stating that, of all broadcasts coming from the Old Country to New Zealand, those of the Orpheus take first place. Fan mail! Yes, to the point of embarrassment.

Friends of Choir. In every walk of life – poets, preachers, artists, composers, musicians, judges, Statesmen, philosophers; gentle and simple, old and young. A poet’s reaction after a London concert Rabindranath Tagore, the great Indian – “The Choir speaks to all men in the language all men understand.” This in reply to a question asking if the meaning of the singing had been clear to him.

Music. Hundreds of pieces sung. Hundreds of “first performances”. Scores of Scottish songs resurrected and set down in a form that has taken them to every part of the world where the native tongue is spoken. Many of the finest choral pieces regarded to-day as essentially Orpheus, including most of Elgar’s unaccompanied work. All Bantock’s Scottish output written for the Choir. Scottish Psalm tunes popularised.

Rehearsals. Attended by visitors from all parts, students, conductors, in uniform and out of it. Over the hills and far away they try the tradition.

Personnel. A classless society. Every member tested each year. completely harmonious. The Choir’s the thing. A camaraderie that transcends everything. In the ranks are, and from the ranks have come, many of our best Scottish choral conductors, both men and women.

Soloists without jealousy. Remarkable, but true. Their names to-day, household words. No tricks. The song’s the thing; the singer merely the medium through which the song goes forth. To show off, the crime of crimes!

A story this, sketchily written down; a story of how a band of simple men and women set out on a great adventure, of what they met on the way, of understanding, and misunderstanding; for there must always be misunderstanding (by some) when a thing is new, and challenging.

A story of set-backs and encouragements, of achievements, of great unforgettable moments, a story of tears and of laughter, of sublimity and frivolity – a human story. For the Choir is very human. When Burns wrote – “The hert’s aye the pairt aye that maks us richt or wrang”, there was no Orpheus Choir. But the slogan seems to fit. For the heart has ruled us in our personal relationships, as in our music-making, has ruled us maybe sometimes at the expense of the head; a failing which (who knows?) may one day be counted unto us for grace.

A story, you will agree, but there’s more to it. The story is not ours alone. After all, we are but creatures of our environment. Without Glasgow behind us there would never have been any worth-while story to write. When we say Glasgow, we do not mean all Glasgow, for there are chunks of Glasgow completely oblivious of our work. But in Glasgow we have always had our people. Through good and ill report they have stuck by us. Never have we called on them in vain. Not that we have asked very much of them, nothing more than their support. But that has been given with a warmth and an emphasis which to us is one of the most moving things in all our story. Glasgow people have enabled us to fare forth. In effect, what the Glasgow support has meant to us, and still means to us is this – “Go ahead! We are behind you.” Well, it is up to us to be worthy of that.

One wee word of warning; lest Glasgow should suddenly find its hat too small for its head; we are supported to-day everywhere, and that wholeheartedly. And, what is tremendously gratifying, by conductors and choristers everywhere. In England, before the present war, there were choirs which made a weekly levy on their members over against a pilgrimage to our Queen’s Hall concerts, travelling to London from as far as Yorkshire, and the West of England, and Wales. “Going up to Jerusalem” was how one Yorkshire singer put it.

Where Glasgow comes specially into the picture is that, in the cold raw morning of our great adventure, when we had little to offer but the promise of a better day, Glasgow stood by us. That Glasgow still stands by us goes without saying. Witness-here in the midst of a great war we, in one season, have had applications for close on 20,000 seats for our two series of Glasgow concerts. Can we be blamed if we take this as a signal to go ahead? Go ahead we shall; carrying the name and, we hope, the fame of Glasgow still farther afield. And this ends our story-meantime.

With the fiftieth season approaching…..

It was with no light heart that I intimated my resignation to you at our recent meeting. This, you know. When the President moved from the chair that the Choir’s policy should be to dissolve at the end of the forthcoming season, and when you, with complete unanimity, endorsed that policy, there was a momentary shock, but we all felt we were acting aright. To me it was so Orpheus-like. We came into being quietly, and it seemed meet to me that we should go out quietly, “our task accomplished”. So, in due time, we plan to lay our 50 years’ contribution on the altar of music, a love-offering, complete, intact, in the hope that it may inspire others to follow our example. In acting thus, I am certain we do the greatest service to music that is in our power, and I am equally certain that future generations will applaud our action, and count it unto us for grace.

The idea of “going out quietly” was an interesting one. Typically, the choir sang to packed houses the length and breadth of the British Isles – as well as eight concerts in Glasgow itself.

Then in the final issue of the choir’s journal “The Lute”, in November 1951, Roberton wrote…..

Well, well, we look back to 25 Rottenrow in 1901, and we affirm, more firmly than ever, our belief in fairies. How else could it have happened?

And it is still happening, for over 70 members of the Phoenix Choir have been accepted for membership of the Glasgow Orpheus Circle which means that we can all meet together in fellowship where the old stories can be told, the old songs sung, and the old laughter revived. And who knows what good may come out of all this? Nothing but good if we take the right spirit into it. Nothing at all if we take the wrong spirit into it. In the break-up of the Choir nothing has been more touching than the desire of the members for togetherness. This desire sprang up in the breasts of one after another until all were actuated by it, and it has flowered out in the Phoenix, and now spills over into the “Circle”. All this says, in effect, – “The Orpheus is dead; long live the Orpheus!” Not that the Phoenix claims to be the Orpheus (far from it), but surely the Phoenix does claim to be Orpheus-suffused and Orpheus-inspired.

“It can never be the same,” said one. “No,” said the other, “but it is the next best thing.” And that’s the matter in a nutshell; and they who will not see it thus are blinding themselves against the light.

We start another chapter in our story, a chapter not of the old music-making but of a new music-inspiring…..